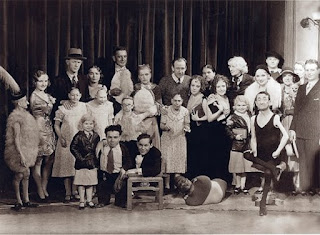 “Gobble gobble, gobble gobble. We accept her. One of us, one of us,” chant the freaks in Tod Browning’s ’32 cult classic Freaks during midget, Hans’ (Harry Earles) and normal, Venus’ (Leila Hyams) wedding reception put on by the rest of the freaks while the one who really loves him, Frieda (Daisy Earles) looks on sadly.

So, last night, Joey and I watched Freaks for the first time this year.  It’s another grounding movie to us.  OK, so, for those in the know knows that Freaks is ultimately a revenge horror movie of the highest order, getting banned in the day in several countries and theaters here in the States, because it was deemed too extreme even with a rumor that it sent a viewer into labor…now, that’s a powerful movie…because, they were honestly freaks from Barnum and Bailey freak show.

Everytime, we watch Freaks, we root for the freaks, because they’re obviously the underdogs.  Now, in the day and probably to some extent today in some crowds, having who I’d call crips, which, in some crowds, would be considered derogatory and uncouth un-PC, on a movie screen depicting in a horror sense is considered uncool and exploitative.  But, look at the premise.  BEWARE, SPOILERS!
Hans pines for the ‘normal’ Venus when he has Frieda, a midget just like him, right in front of his face.  Venus realizes this, and uses it to her advantage with the help of her real lover, Hercules (Henry Victor) to get Hans’ perceived fortune by slowly poisoning him…except, the other freaks get wind of the plot.  The ending is considered one of the most shocking in movie history.

Browning, who worked in a circus before, got the idea for Freaks from this history.  He gave them jobs, which might’ve been there only movie credit, but they were stars and they were out there.  Now, after the movie came out, a few freaks reneged on liking their participation, because it was the first time people saw them...and, to be painted in that light.  Still, to me, it’s human nature to fend for oneself when threatened no matter the level of able-ness.

Be good to each other.