Having an Epiphany with the Greatest Showman. 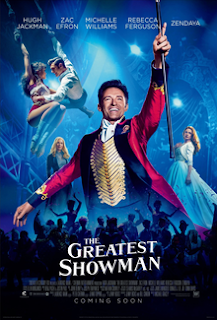 “When the sharpest words wanna cut me down
I'm gonna send a flood, gonna drown them out
I am brave, I am bruised
I am who I'm meant to be, this is me
Look out 'cause here I come
And I'm marching on to the beat I drum
I'm not scared to be seen
I make no apologies, this is me,” sings Lettie Lutz, The Bearded Lady, played by Keala Settle in the musical biopic The Greatest Showman, based on showman and modern circus creator, P.T. Barnum.

First off, who would’ve thought that Wolverine could sing unless you were fortunate to see him on Broadway!  Holy shit, Hugh Jackman sings with so much feeling that he literally had Joey and me in tears.  I mean, boohoo, we can’t help, but feel…especially in the opening number “A Million Dreams, “ which begins with young Barnum played by Ellis Rubin with the vocals by Ziv Zaifman, whose voice is so angelic, I immediately fell in love with the movie regardless of the possible trainwreck I might be subjecting myself as well as Joey to.  The remaining 95 minutes was far from a trainwreck.  As a matter of fact, and Joey admitted she was thinking the exact same thing as I was the entire film…we are exactly where we’re supposed to be, doing exactly what we’re supposed to be doing…reaching out to people across the human rainbow regardless of abled-ness or cripness.

Now, reading about the making of the movie to the real story of Barnum’s coming up, I know director, Michael Gracey, and writers, Jenny Bicks and Bill Condon, took some creative license with some of the happenings and Zac Ephron’s and Zendaya’s characters being made for the secondary romantic plot.  This didn’t detract from the movie by any means since it fit nicely into the grand scheme of the film of acceptance, making your path regardless of people’s perception of what you should be because of your upbringing or the way you look.

The movie depicts Barnum as kind of a shyster and someone always in need of proving his worth since he was orphaned young, but with good and lofty intentions in that how he gets the loan to start his oddity museum, which worked two-fold, to give the freaks jobs and to support his family since he had two daughters.  The real Barnum had four.  But, before he had those daughters to support, he had to prove he was worthy of Charity’s (Michelle Williams) hand to her well to do father.  Of course fame came with the price of being labeled an exploiter by his critics, specifically James Gordon Bennett, NY Herald head, played by Paul Sparks.  While I’m on the character subject, the casting and look of the characters mirrors their real-life counterparts damn near perfectly.

Since this is a musical, the tracks have to coincide with the goings-on on screen.  Pasek and Paul’s lyrics are so profound and strong, Joey and I couldn’t help bob our heads through the tears of pure joy with melodies that were sweeping and exploding with feeling whether it was the anthemic “This is Me” sung with so much tearjerking emotion by the beautiful Keala Settle or the sad “Tightrope.”

Jackman has said in interviews that Showman took seven years to make, because studios didn’t want to touch it thinking it would take with audiences…wrong!  Eventually, the combined team of Chernin Entertainment, Seed Productions, Laurence Mark Productions, and TSG Entertainment bit and produced the movie with 20th Century distributing.

God, I can’t say enough about this movie without giving the whole damn thing away, and this is a movie that NEEDS to be seen in theaters.  I don’t say that much anymore since we have a 4K TV, and most movies, though are mostly good and are bigger, the picture’s just meh.  This movie is that damn good.  Hell, like I said at the beginning of this blog, Showman reaffirmed Joey and I (freaks by some in society) am right where we’re supposed to be, doing exactly what we’re doing whether we get noticed and go viral or get donations.  If we’ve touch that one, we’ve done our jobs.  Given that, why the hell are you reading this, and getting your asses to the theater?!  Oh yeah, it’s 3:45 AM.
Until later today, be good to each other.